The Cult and Images of Saint Rose of Lima in Lithuania

Isabel Flores de Oliva (1586–1617), generally known as Saint Rose of Mary or Saint Rose of Lima, became the first and, until today, the most venerated Catholic saint of Latin America. Almost immediately after her death, this Dominican of the Third Order, who died young and won fame for her highly ascetic life, various virtues and immovable faith, developed a cult following in Peru. Soon enough the cult had spread across South America and Europe. The topic of Saint Rose of Lima has been addressed in a great many publications that appeared in various (primarily Spanish-speaking) countries, but in Lithuania, the devotion to and images of this saint have not received specific research attention. By referring to the published sources and manuscripts, as well as the surviving ecclesiastical artworks, the author of this paper aims to discuss in more detail how information about the life and personality of Saint Rose of Lima was disseminated in the Grand Duchy of Lithuania, what information about Latin America, its culture and people was conveyed in these sources, whether it was reflected in the icono- graphy of the saint, and if so, how.

(b. 1960, Lithuania) is an art historian and leading researcher at the Institute of Art Research of the Vilnius Academy of Arts. Her field of research covers cultural heritage of Lithuanian fine arts during the 16th–19th centuries, creative work of professors and scholars of the Vilnius Art School, iconography of sacral art and its connection to the spiritual traditions of monasteries. Author of the books Jonas Rustemas (1999), Kazimieras Jelskis (2003), Bernardinų bažnyčia ir konventas Vilniuje. Pranciškoniškojo dvasingumo atspindžiai ansamblio įrangoje ir puošyboje (The Church and Friary of Observant Franciscans in Vilnius: The Reflection of the Franciscan Spirituality in the Interior and Décor of the Ensemble, 2010), Sapiegų rūmai Antakalnyje (The Sapieha Palace in Antakalnis, co-author E. Purlys, 2012) and co-curator of exhibitions Jonas Rustemas – dailininkas ir pedagogas (Jan Rustem – Artist and Teacher, 2012); Po Italijos saule: Lietuvos dailė XVIII a. pab. – XX a. I p. (Under the Sun of Italy: Lithuanian Art 18th - First Half of 20th Centuries, 2017), Sakralinis Vilnius. Nuo Aušros Vartų iki Kalvarijų (Sacral Vilnius. From Gates of Dawn to Calvary, 2021). Janonienė was awarded Lithuanian Science Prize by Lithuanian Academy of Sciences in 2011. Former director of Institute of Art Research of Vilnius Academy of Arts (1994–2008). 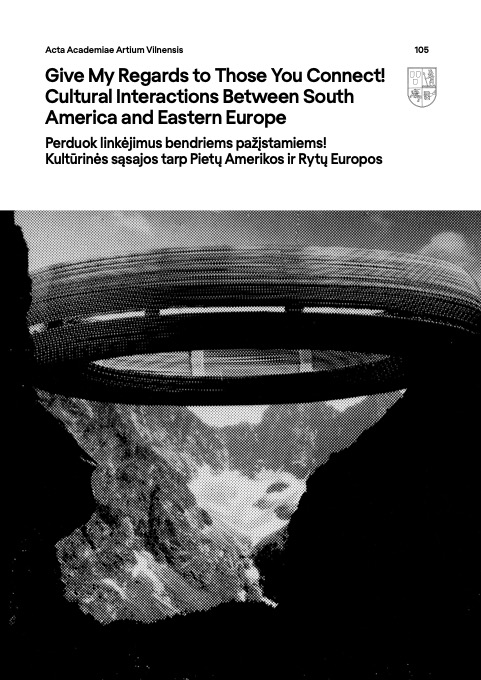 Vol. 105 No. 105 (2022): Give My Regards to Those You Connect! Cultural Interactions Between South America and Eastern Europe

Most read articles by the same author(s)